is a space dedicated entirely to the documentation and mediation of Charlotte Posenenske‘s work, making her art and the contextual archive material relating to her life in Frankfurt during the Sixties accessible. Simultaneously, contemporary positions from the fields of art, design, or architecture will be invited to engage with the artist‘s œuvre by showcasing evolving related ideas. Charlotte Posenenske (1930-1985) was creatively active in various spheres before giving up art in 1968 for socio-political reasons. The indus-trially produced, sculpturally striking group of works from her final three years of creation was posthumously continued by her second husband, Dr. Burkhard Brunn (1936-2021).
It is last but not least due to his considerable commitment that these „Authorised Reconstructions“ have been inter-nationally exhibited and continue to receive much acclaim (among others, Dia Art Foundation, Beacon; MoMA, New York; Tate Modern, London; M+, Hong Kong; Art Gallery of New South Wales, Sydney; MMK, Frankfurt; Nationalgalerie, Berlin). Without Burkhard Brunn, also the Archiv Charlotte Posenenske would not exist. 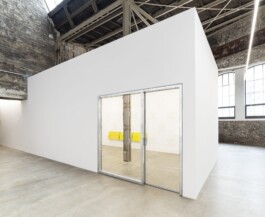 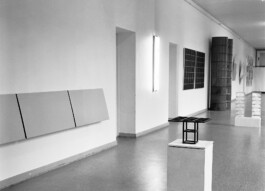