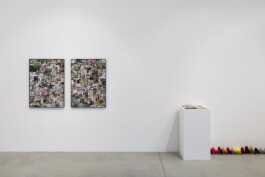 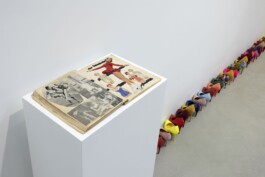 Hans-Peter Feldmann has been exploring the perception and use of images for more than five decades. He regards them not only as “a window to the world” but also as a subject of work.

From an early age, the artist engaged with the pictorial world of stamps, collecting various motifs, ranging from Queen Elizabeth II to the Statue of Liberty, and sticking his selection into small-format notebooks. Another form of Feldmann’s early commitment to images reveals itself in his collection of so-called “Sanella pictures”. It is in the margarine brand Sanella’s packaging material that Feldmann discovered the cosmos of image collections, which he stuck into albums. As a young artist, after attending art school in Linz, Austria, in the mid-1960s, Feldmann advanced his method of cutting, collecting, and sticking. In doing so, he infused the everyday aesthetics of reproduced images with a new meaning by removing them from their original contexts and transferring them into new pictorial association fields. Initially, Feldmann mounted the pictures he had cut from advertising brochures onto the backs of his early paintings and arranged magazine cut-outs with scrapbook pictures, creating his own interpretation and a new visual world. His later collages, presented in this Art Exhibition, show everyday images containing trivial and romanticizing motifs or obscene and gruesome scenes. There are visual juxtapositions of different motifs, monothematic image compositions, as well as objects that construct the stories, associations, and remembrances of our collective memory. Feldmann’s paintings are tied to memory production in that they can be understood both as an act of personal processing and a societal representation of experience.

By not using captions or accompanying comments, the artist refrains from giving an interpretation of his work, consequently elevating the respective painting or object beyond its immediate presence. Each work thrives on the viewers’ individual willingness to perceive and interpret. Detailed artwork specifications, the artist’s signature, or other art practice formalisms are not a part of the artist’s self-positioning. Feldmann, who does not refer to himself as an artist, works with enigmas, like many of his contemporaries. No one can tell what is inside the cardboard boxes of the wooden shelf on display here, and the backs of the oil paintings provide equally little information about the pictorial motifs. In his art, Feldmann merges the idea and the concept, as well as action, emotion, and personal narrative.

A defining theme of Feldmann’s oeuvre is the collection, reuse, appropriation, and modification of found objects and pictures. For example, he paints over existing paintings from earlier periods, giving a dog a squint, placing a black bar in front of the eyes of a group of putti, or applying a red clown’s nose to a skeleton, thereby transforming the found picture into his own. Laid out as a leitmotif, Feldmann’s collection of paintings is encountered through various forms of presentation; for example, there are paintings suspended in the exhibition space, leaned against walls, or displayed in a “Petersburg hanging.” Feldmann's installations know no limits as he chooses to vary between fixed principles of order and arranged disorganisation. He produces his own visual material, reproduces that of others, and presents it in series or groupings within the exhibition space or in books. Feldmann’s “books, publications, and notebooks” play an essential role in his oeuvre; their aesthetics and content are inextricably linked to his artworks. His artist’s books are vehicles of his conceptual ideas; they are carriers of his works, spaces of his personal experiences, and exhibitions in themselves.

Hans-Peter Feldmann oscillates between different techniques, genres, and media. He founded his own publishing house with a store and a mail-order business for thimbles; he ran a gift shop in Düsseldorf, intending to move it to a museum context for preservation. He anticipated trends in art history, such as Appropriation Art, and continues to reject being categorised into any one art movement. To this day, his art is as socially critical as it is humorous. The attempt to apply terminological attributions such as the activity of archiving to the artist and his work is nipped in the bud by Feldmann: “I have nothing to do with archives. Just as I don’t have a submarine, I don’t have an archive.” Instead, as a collector of images, Feldmann presents us with familiar imagery from everyday existence, advertising, and print media in order not only to establish a connection between art and life but also to declare regular events and things as worthy of depiction. In doing so, he pursues the principle of reproducibility to the utmost, expanding notions of the original beyond traditional concepts of the image and value. With his democratic approach of making art accessible to all, not signing his works, and producing them in unlimited editions, Feldmann defies the rules of the market, the exhibition system, and typical artists' attitudes. As one of today’s most important contemporary artists, Feldmann continues to be at the pulse of our time.